A demonstration of how to package a python script into an executable file. This tutorial includes compiling to one file, no console, how to add an icon and adding other files to the final package.

If you haven't used or setup pip before, go to my tutorial at how-to-setup-pythons-pip to setup pip.

Now that pip has been set up, execute the command pip install pyinstaller in cmd. Make sure to check the output for errors as if there are errors it would not have installed successfully. PyInstaller now supports Python 2.7 - 3.7 including Python 3.7.

To make sure it installed properly, type pyinstaller in cmd and make sure no errors appeared. 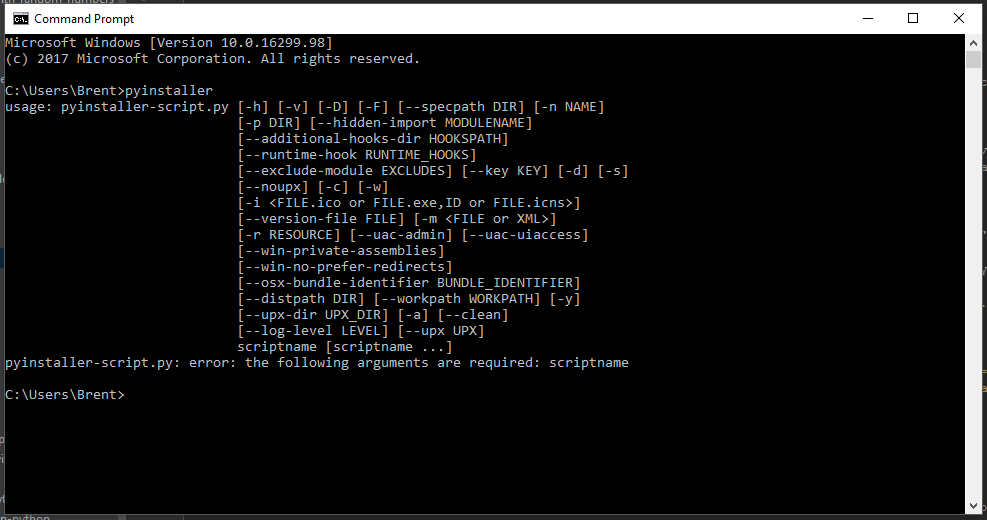 Created a new folder and put your python file in it and any other modules or files it may need. Then hold shift and right-click in the folder, in the menu that popped up, click "Open PowerShell Window Here" or "Open command window here" for older versions of windows. If this option doesn't appear, try again or open cmd and type cd {folder location} to move to that folder. 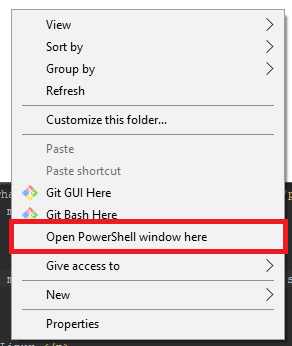 Now that cmd is in the right location, execute pyinstaller {the name of your python file} make sure to add .py or whatever extension it has. Wait for it to finish and check if any errors have appeared. If none have you can close cmd and look at the three folders generated.

Look in the 'dist' folder and you should see {the name of your script}.exe. If you run that your script should execute as an exe.

When running the compiled script, you will notice a console window will appear. If you do not want this, add the 'w' flag to the statement when creating the script.

Thus the new statement will be pyinstaller -w {the name of your python file}. Now when you run the .exe, the console will not appear.

If you want all the files to be packed into one .exe you will need to add the 'F' flag. Thus the new statement will be pyinstaller -F {the name of your python file}. Note that this will not work for all python scripts due to third party libraries or how the script works. You will find out if it works or not by running the .exe in the 'dist' folder.

If you want to use onefile mode with external files, it will pay to read this

To add an icon to the final .exe (normal or onefile) add the 'i' flag and then the location of the .ico file (do not rename a .png/.jpg/.bmp to a .ico - I have had dumb people in the comments do this). You can find some nice icons here.

Thus the new statement will be pyinstaller -i {icon location} {python file}, remember to not forget about extensions.

Since pyinstaller only searches for Python files, you need to add data files like images, databases and JSON files yourself. To do this, simply provide the --add-data flag with the source and destination of your file as many times as required.

As described in the documentation, to use this flag, it must be formatted as --add-data SRC;DST. SRC is the source file path of the file you want to add, for example C:\Users\me\Desktop\my-image.jpg, this can be either an absolute or relative path to the current working directory. DST is the destination in the packaged folder/executable. I recommend using a . to put a file in the root path. You can also specify a folder, for example, images which will then create a folder named images and copy the file to there.

If you can't get this to work, I recommend trying out my project called auto-py-to-exe mentioned below. The application takes care of moving extra files and many other things so you don't have to.

The separator between the SRC and DST can be different on different platforms. Windows uses ; whereas most other operating systems like OSX and Linux use :.

You can combine these flags to make things like onefile executables with no console and an icon by using a statement like: pyinstaller -w -F -i {icon location} {python file}

In March 2018 I created an application that allows you to create executables easily from Python scripts. It is a simple graphical interface built with Eel in Python and uses pyinstaller in the background. 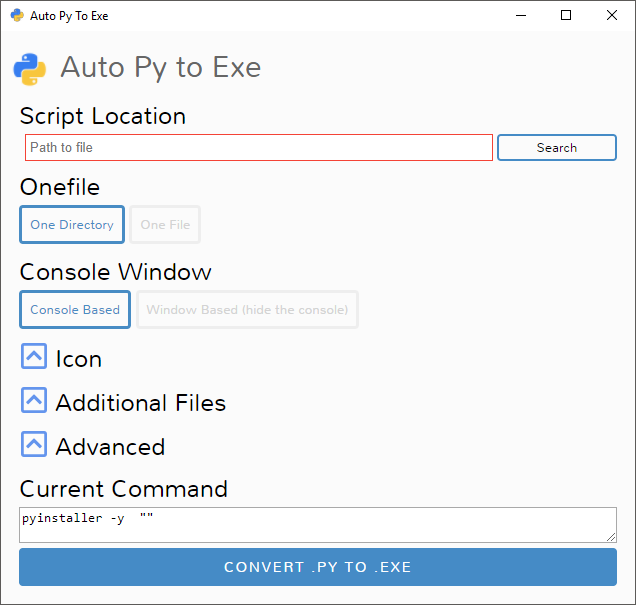 Assuming the python script runs properly by itself then this would have been caused by an incorrect configuration or third-party modules. The best way to find what the issue is, is to add --debug all to your command and then re-package it. This will mean the exe is now in a debugging mode. Open up cmd and then run the exe using cmd e.g. "C:/folder/path/myexe.exe". Any errors will be preserved in the console which you were previously missing.

Make sure you are holding down shift. If you are using new versions of Windows, this has been replaced by "Open PowerShell Window Here". Using this method will work the same for this tutorial, so go ahead and use PowerShell.

'pip' is not recognized as an internal or external command

Please follow the pip setup again, you have done something wrong. Alternatively, you can try to use python -m pip {command}.

'pyinstaller' is not recognized as an internal or external command

Go back to the PyInstaller heading, you have not installed pyinstaller, remember to test it.

When editing the PATH variable, I can only edit the variable

Add a ';' to the end and then put in the folder location, then apply/save it. This input is like this because you are using an older version of Windows.

The exe does not work on another computer

This may be an architecture issue. PyInstaller will create an executable with the architecture of the machine it was built with. You are most likely using a 64bit machine if you are asking this question to compile the .py; thus it will create a 64bit executable. As with any other programs, you cannot run 64bit on 32bit but you can run 32bit on 64bit. Thus I recommend using 32bit python or compiling on a 32bit machine so it will work on both architectures.

My antivirus detected my exe as a virus

This is your anti-virus vendors fault. Check out this.

I get lots of WARNINGs when running pyinstaller

These warnings can be ignored in most cases. I have not currently found a situation where these are an issue, after all, they are only warnings.

Will this add my other scripts? / Will this work with external Python modules?

If your main script imports your others scripts, then yes. PyInstaller looks at imports to figure out what to bundle, so it will add your other scripts just like if you were to import os or time.

is it available in Walmart?????

I don't believe so, sorry.