This project allows you to convert python scripts to executables with a simple interface. The interface uses chromes app mode and lists all possible flags for pyinstaller. The whole idea seems automatic as it cleans up after itself.

This application displays a simple interface that allows you to convert py to exe easily. By just selecting the file, if you want it to convert to onefile and if you want a console, you will only need to press convert and wait for the script to do the rest. 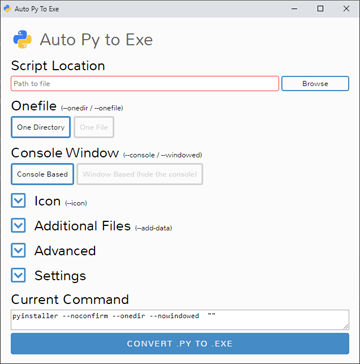 The script is built using Eel and uses PyInstaller to convert the script.

To have the interface displayed in the images, you will need chrome. If chrome is not installed or --no-chrome is supplied, the default browser will be used.

You can install this project using PyPI:

Then to run it, execute the following in the terminal:

Then to run it, execute the following in the terminal:

Running Locally Via Github (no install)

You can run this project locally by following these steps: 1. Clone/download the repo 2. Open cmd/terminal and cd into the project 3. Execute python -m pip install -r requirements.txt

Now to run the application, execute python -m auto_py_to_exe. A Chrome window in app mode will open with the project running inside.

Make sure you are in the directory below auto_py_to_exe (you will be after step 3) when calling python -m auto_py_to_exe or you will need to reference the folder auto_py_to_exe absolutely/relatively to where you currently are.

If you are running this package locally, you will need to call python -m auto_py_to_exe instead of auto-py-to-exe

Instead of inserting the same data into the UI over and over again, you can export the current state of the UI by going to the section "Configuration Import and Export" at the bottom of the advanced tab and exporting a JSON string to the clipboard or a file. This can then be imported into the UI again to re-populate all fields.

If you need something visual to help you get started, I made a video for the original release of this project; some things may be different but the same concepts still apply.

If you're having issues with the packaged executable or using this tool in general, I recommend you read my blog post on common issues when using auto-py-to-exe. This post covers things you should know about packaging Python scripts and fixes for things that commonly go wrong. 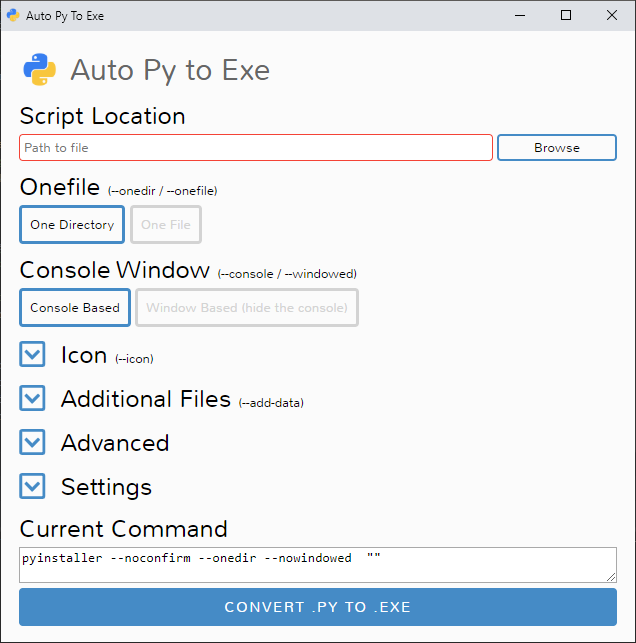 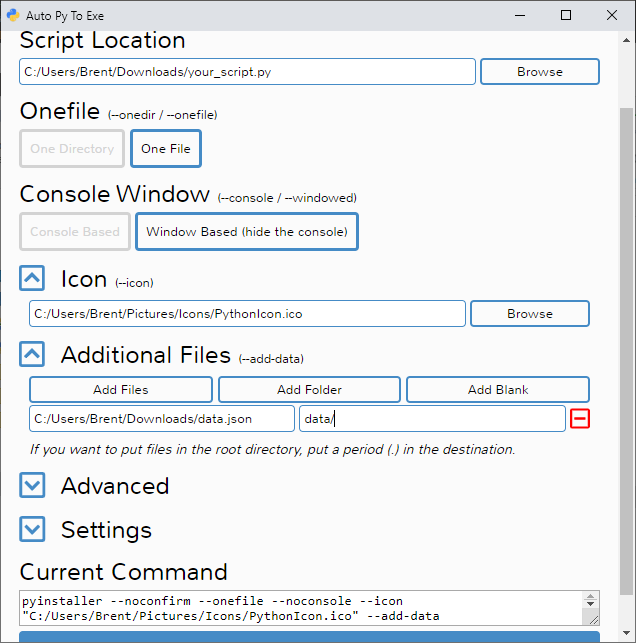 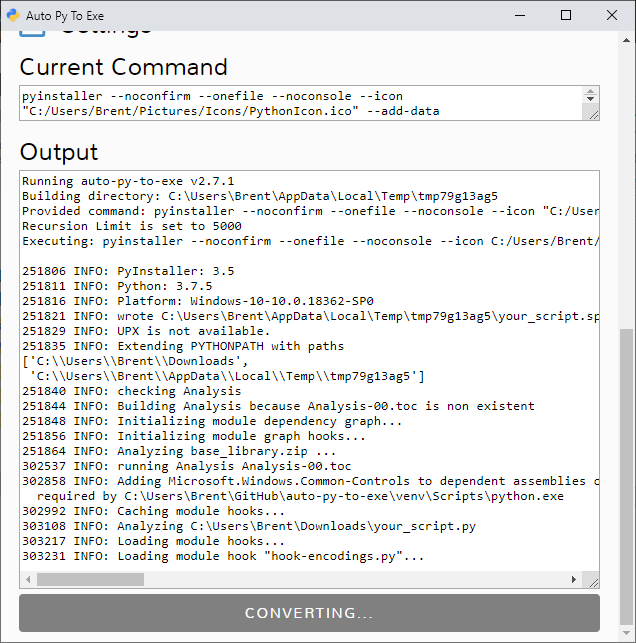 I really wanted to get this project out there so I released a YouTube video demonstrating how to set up and use the interface (video above). A day later I made a post in the /r/Python subreddit titled "Auto Py to Exe is Complete". To my surprise, the next morning (about 7 hours) I had more than 300 upvotes which to me was a big thing. I had many replies which I took time to read and reply to. About 44 hours later the post finally lost its top place on the subreddit and the post is sitting at 454 points with 12.1k views and 75 comments. I can't believe how big this got and it means a lot to me when I saw people thanking me for the project. When a couple of issues came to the Github repo I realised people do care about this and I was quick to fix these. Once again, thank you for the support; I loved making this project.