A small GUI that displays home-made scripts to be executed. The scripts will appear in a scrolling window and on selection they will run and the window will then close (can be configured). Sample scripts included.

This project was my attempt to stop throwing out useful scripts that I made to make small tasks easier. I had always found myself making things and deleting them later as I didn't think I was going to use them again. This project allows you to attach a script easily to this project which makes things searchable and easy to run. I connected a hotkey to this to run smaller things. 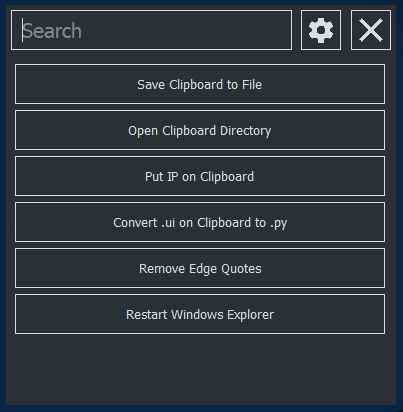 To run this the script quick-script.py needs to be run with Python. A window will appear with your scripts.

This file is located by quick-script.py and keeps a record of settings and script run counts.

To make a script appear in the UI they need to be in the /scripts/ folder. The script needs four main features; name, description, tags and a main method which returns True on success. An example of a script is shown here:

The scripts can be named anything as long as they are in /scripts/ with a .py extension. The script does not have to have name, description or tags, they will just be rendered as none.

A parameter can be added to the main() method and as long as there is only one parameter required, the window class will be passed to main() so the method will now have access to the window and can use functions like dialogCritical().