How To Set Up Open Drone Map On Windows

This tutorial explains how to get WebODM running on Windows using WSL 2, Ubuntu and Docker Desktop.

In this tutorial, I'll run you through the steps of setting up Open Drone Map (ODM) on a Windows machine - specifically WebODM.

To do this, we will first setup WSL 2 and setup Ubuntu within windows. When complete, we will then set up Docker Desktop and make it run on WSL 2. Using docker we will then be able to run the WebODM docker image.

For this tutorial, to get WSL 2 setup, you will need:

To find your version number, execute the following in PowerShell:

To find the build number of your Windows installation run the following in PowerShell:

If neither of these values are high enough, try checking for updates and updating Windows. You may have to update Windows multiple times to get to the desired version and build.

Note: Windows Home and above is supported using this method.

I recommend installing the new Windows Terminal as it allows you to access the different terminals on your system in one place.

I recommend it as it will allow you to easily access your Ubuntu distribution with a nice terminal when it has been set up. You can find the Windows Terminal in the Microsoft Store.

These instructions are based on the steps in Microsoft's Windows Subsystem for Linux Installation Guide for Windows 10 documentation page at the time of writing this. If you have any issues with these steps, I recommend taking a look at the docs directly to see if a new step has been added.

Did you have any issues with these step? The original Microsoft documentation troubleshooting section might offer some help.

For this tutorial I will be using Ubuntu, you do not have to use Ubuntu but you will need to install an OS that supports docker.

After creating the user, you should now be able to execute Linux-based commands. To make sure Ubuntu is running in WSL 2, execute wsl --list --verbose in PowerShell, you should see something like:

VERSION=2 for Ubuntu means it is running in WSL 2. If it is not running in WSL 2, you may have not set the default version as shown in a previous step. To fix this, execute wsl --set-version Ubuntu 2.

Now that WSL 2 and Ubuntu are set up, download Docker Desktop for Windows (I recommend using stable) and install it.

After installing Docker Desktop and restarting, it will start automatically in the background. You will be able to see a new icon on the taskbar that looks like this:

Right-clicking on this icon will give you a menu; go to the dashboard on this menu.

If you cannot see the taskbar icon, check the up chevron to see if it has been hidden away. If it is not their either, search for "Docker Desktop" in the start menu search, it should be there if Docker Desktop is installed.

On the dashboard that just opened, go to the settings using the cog at the top.

Under the "General" tab, make sure "Use the WSL 2 based engine" is checked (could be greyed out on Windows 10 Home). 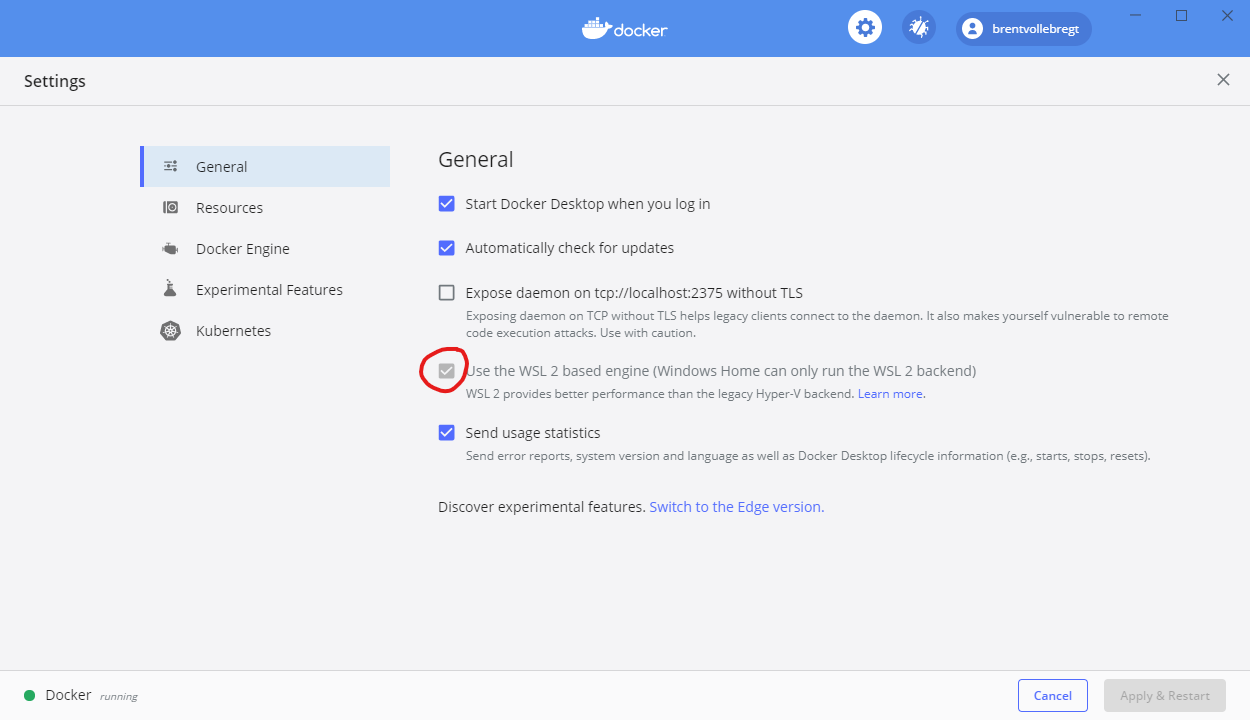 Under the "Resources"->"WSL Integration" tab, make sure "Enable integration with my default WSL distro" is checked and that the switch by the Linux distribution installed (Ubuntu) is turned on. 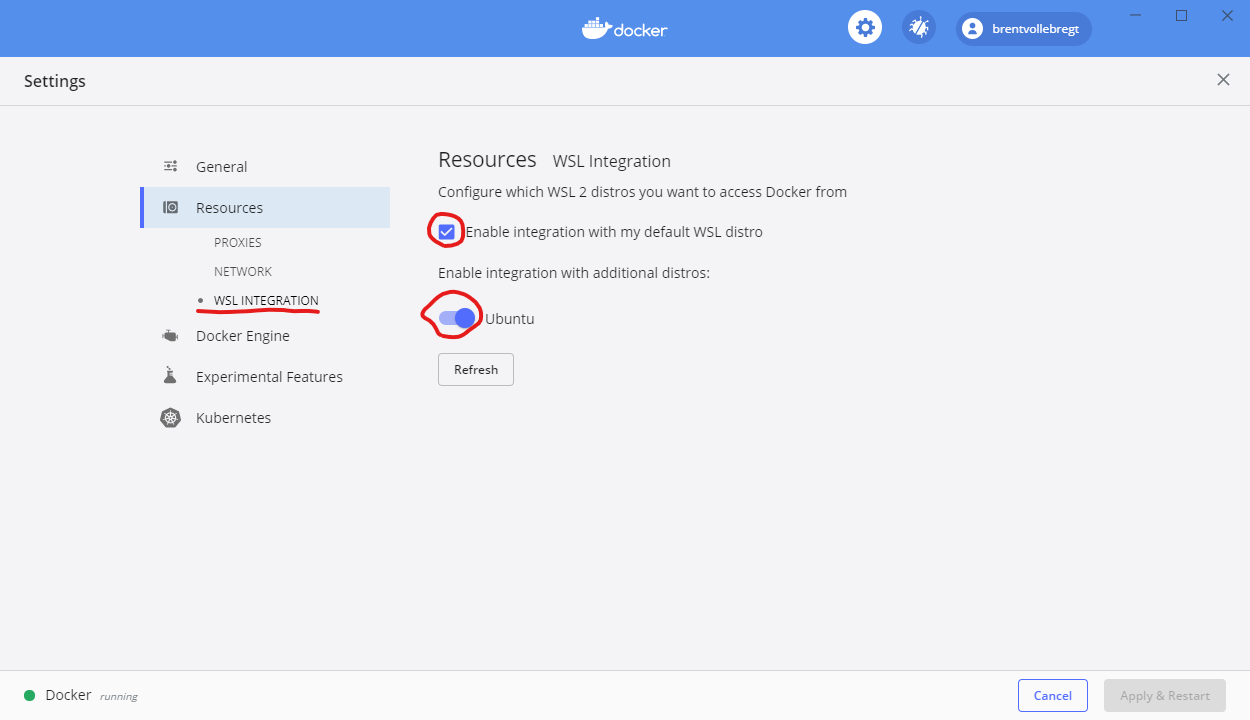 If you had to make any changes in the settings, you will need to click "Apply & Restart" in the bottom right.

In a new terminal (you may need to start a new session), execute docker info; if you get something like the following, it has worked and you can now use docker.

Now that docker is setup, we can get WebODM running.

Starting WebODM may take a while as it has to set up and build all the containers. If you open up the docker desktop dashboard again, you will be able to see it's running when everything is green: 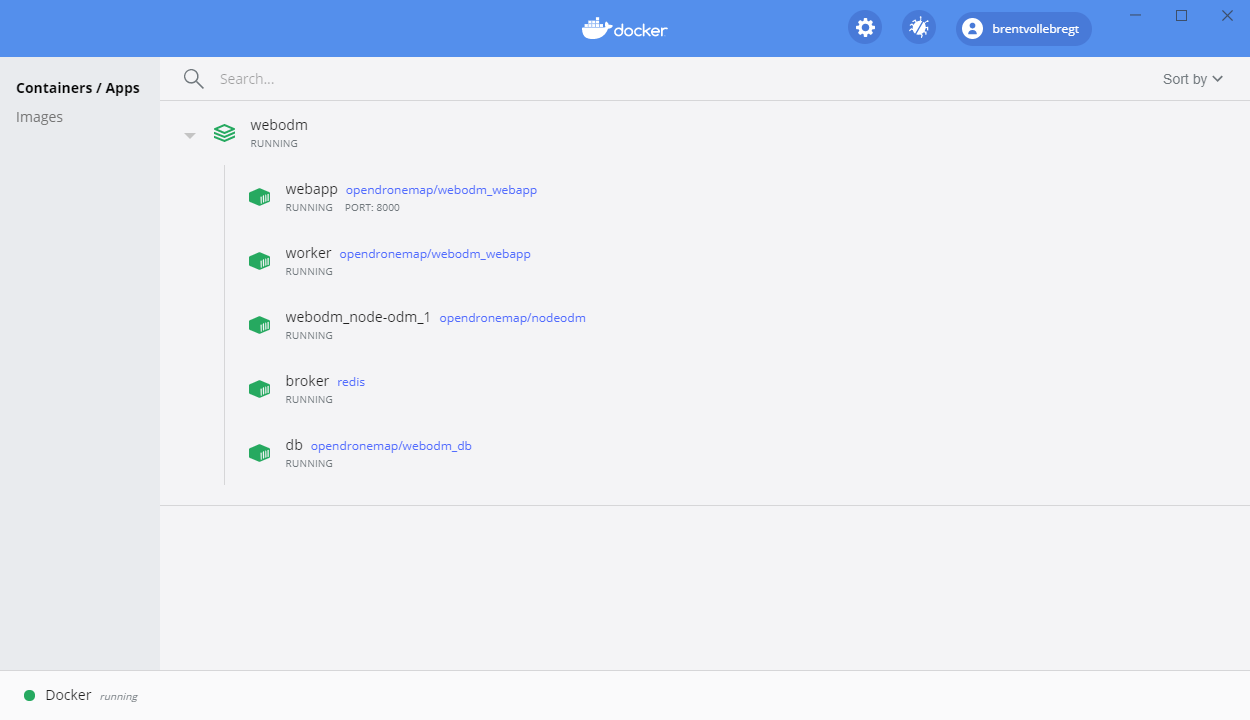 If you look at the "webapp" container and click on "Open In Browser", a browser tab/window will open at the address WebODM is hosted at.

When first loading the application, it will ask you to create a username and password. If you forget your password later on, this will help - remember WebODM needs to be running and this will only change the password, you need to remember the username.

After setting up the username and password, you will now be able to use WebODM:

Since WebODM is running in docker containers, it can easily be stopped to save on system resources.

To stop WebODM press Ctrl + C in the terminal that opened with WebODM logs in it or run: