This tutorial covers the basics of how to create GUI's in Python using PyQt5. I will demonstrate how to find the designer and basic usage, converting .ui to .py, running the output file and connecting events to methods.

Please understand this process is not the recommended method when using PyQt5 designed / pyuic; this is simply a demonstration of designing a UI using the PyQt5 designer tool, generating Python code and then partially understanding what comes out.

This tutorial is not obsolete however as it can help you get a basic grasp of how to use PyQt5.

The reason the method demonstrated below is not recommended is due to the fact if you use pyuic again to turn a .ui file into a .py file, it will overwrite all your changes to the file. I have a tutorial at How to Import a PyQt5 .ui File in a Python GUI which better explains how you should import the generated script so your changes will not be overwritten.

If you only intend on using the generated code as an initial layout and not re-generate the code (I do this a lot), you may find this method easier than importing as you can make changes to the layout a lot easier this way.

Setting up the Environment

For this tutorial, you will need a version of Python equal to or above 3.5. I do however recommend to get a more recent version than 3.5 as I had issues with 3.5.2; a simple upgrade to 3.6.6 fixed this. If you don't know where to get Python, look here.

You should now be able to execute the following in Python with no errors:

If you have issues installing PyQt5 for some reason, you could try the installers at its sourceforge page.

When you ran the pip install pyqt5-tools command, this installed tools that we can use to help with building GUIs.

First, we need to locate where they are now, to do this we can run the following code in Python:

designer.exe is the program that we will use to make designing GUIs a lot easier; remember the location of this or create a shortcut to it and then run it (double click if you wish). You will be welcomed with a selection window; select "Main Window" and then click "Create". 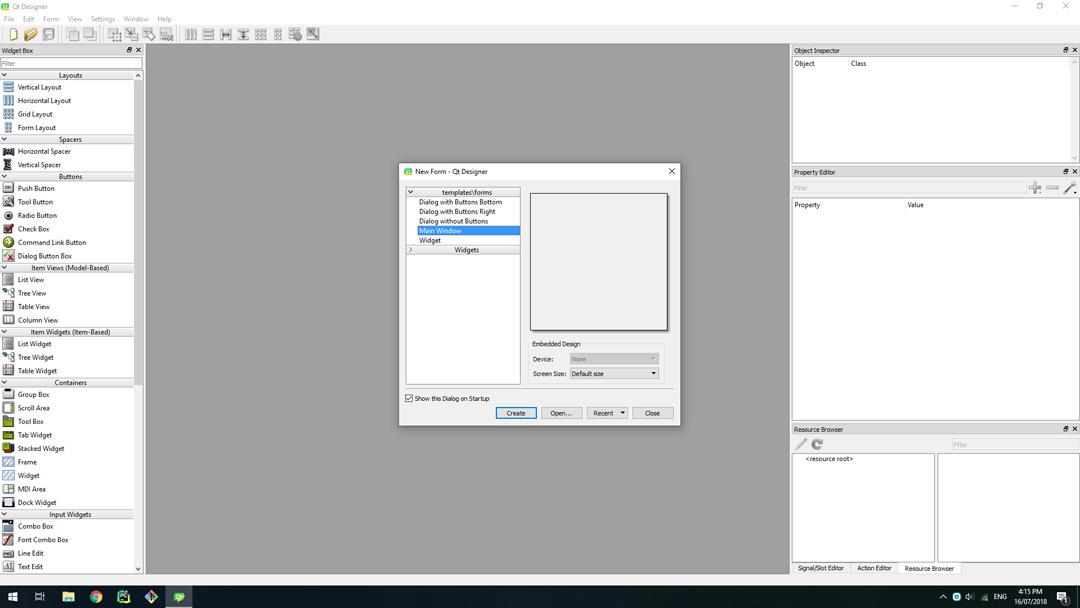 You will now be shown an empty window in the middle of the designer's window with widget options on the left and some other windows to the right.

On the left, you can drag widgets from the drop-downs onto the MainWindow object in the centre. On the right, in the Object Inspector, you can see the current widgets in your window. Right below that is the Property Editor that allows you to modify the widget currently selected. 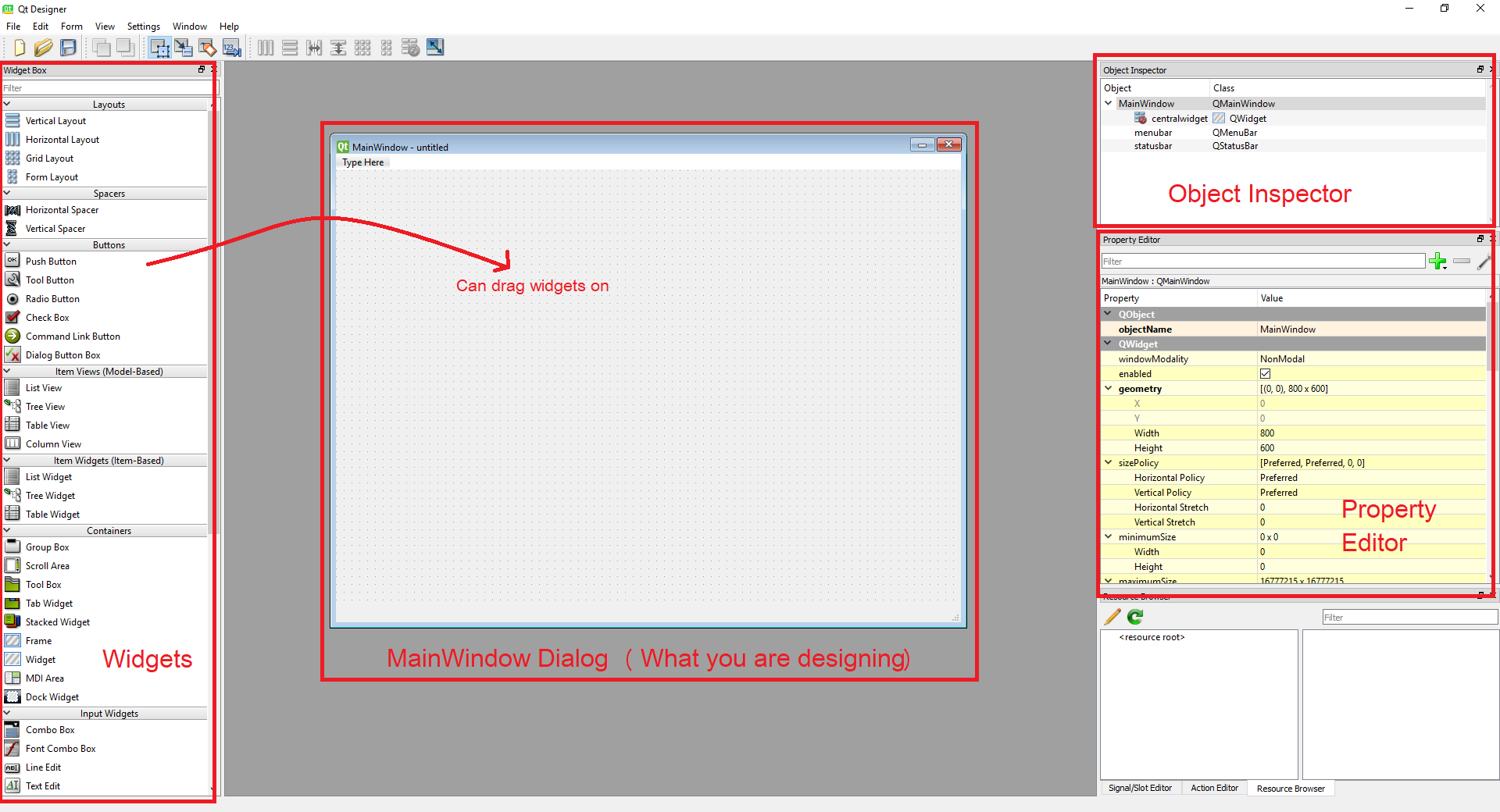 For this example, we will be just putting a button that prints "Hello World!" when pressed in the Window; soon we will work with a larger example when the basics are out of the way.

First, make your window a bit smaller by clicking and dragging the bottom right of the window (or any part on the edge) to change the size as you would do on any other window. Now find the "Push Button" widget under the Buttons section (on the left) and drag it into the window anywhere. You can double click on the button now to rename the text in it; set it to "Print Message".

You may now want to change the size of the button, to do this click on the button until there are blue squares on each of its corners and edges. Use these blue squares to re-size the button to a size you want.

When you are happy with what you have done (this is just a simple practice) then click File -> Save in the top left and save it somewhere where you will remember; I will save it as 'printMessage.ui' on my desktop.

Now that we have our .ui file, we can convert it into Python code so we can modify and run it.

To do this we need to locate pyuic5. pyuic5 converts .ui to .py in one simple command and is located in the 'Scripts' folder in your Python distribution. If you don't know where this is, execute the following:

You will be provided with a path of where your python distribution is located; mine is at C:\Python36 (we saw this before when looking for the designer). Now go to this directory and open the 'Scripts' folder in there.

In this folder you will see a few executables to make Python in the terminal easier, you should also be able to see a file named pyuic5.exe; this is what we are going to use. Open cmd and then use the cd command to get to the directory; for example, I will execute cd C:\Python36\Scripts in cmd. Now if you type pyuic5 you should be provided with a small error message saying "Error: one input ui-file must be specified"; this is good, we are in the right place.

To convert we now need to pass in the .ui file we created before and decide on an output filename and location. My .ui file is on my desktop currently so I will put the created .py file on the desktop also to make it easier. Now we can convert using pyuic5 -x <.ui file> -o <output.py file>, for example I will use pyuic5 -x "C:\Users\Brent\Desktop\printMessage.ui" -o "C:\Users\Brent\Desktop\printMessage1.py". This should take not very long at all and show no errors; the python script you declared after -o will now exist - for me, a file called printMessage1.py is now on my desktop.

Running the Output and Hooking up the Button

Now that you have the .py file containing the ui code, open it in IDLE or whatever IDE you use. Your code should look something like this: 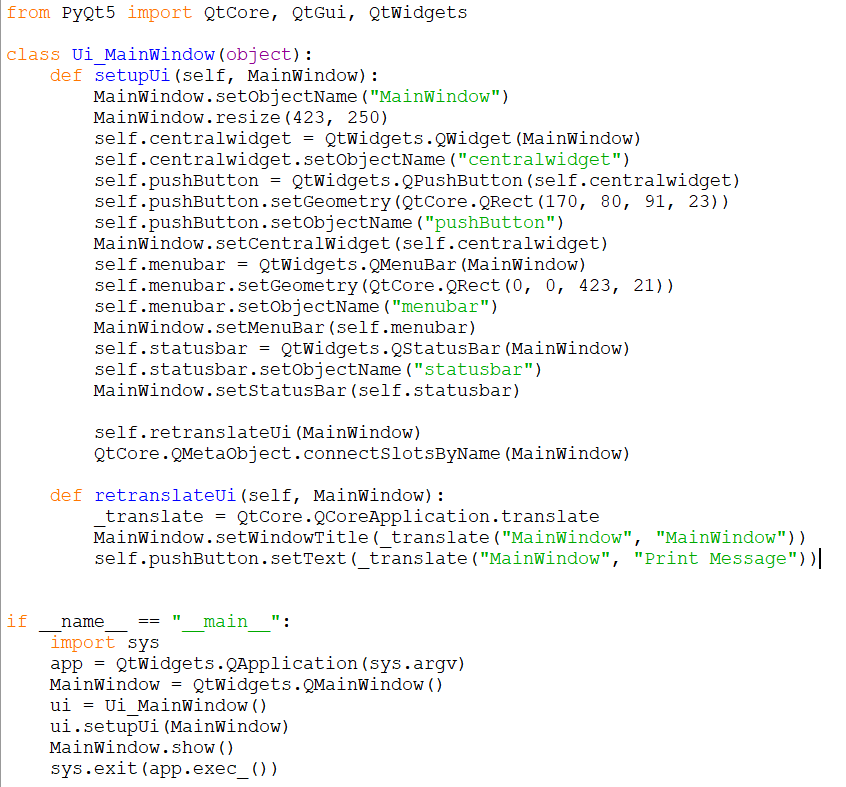 Run the code and then wait for the GUI to appear; it currently won't do anything when you press the button so we will set that up.

Go back into the code for this GUI and look in the setupUi definition. You should see a class variable called self.pushButton which later has its text set to "Print Message" in the retranslateUi definition below. This is the object of our button that we need to make do something.

First, we need to create our method, this method can be in the global scope or in the class scope, for simplicity I will put it in the class scope. After the retranslateUi definition, create a new class called printMessage that takes self as an argument since it is part of the class now. Inside this put what you want the script do to when you press the button, for this example, I will print "Hello World!".

Now that you have created the method to run, we can attach it to the button. Using the button variable we found before, we can call .clicked.connect() on it passing in the name of our method we just created (make sure to remember self. for class variables). Put this line at the bottom of the setupUi definition so it will be executed when the GUI is built.

Remember to not include () when passing the method here or it will not work.

Your script should now look something like this, don't worry if it is a bit different. 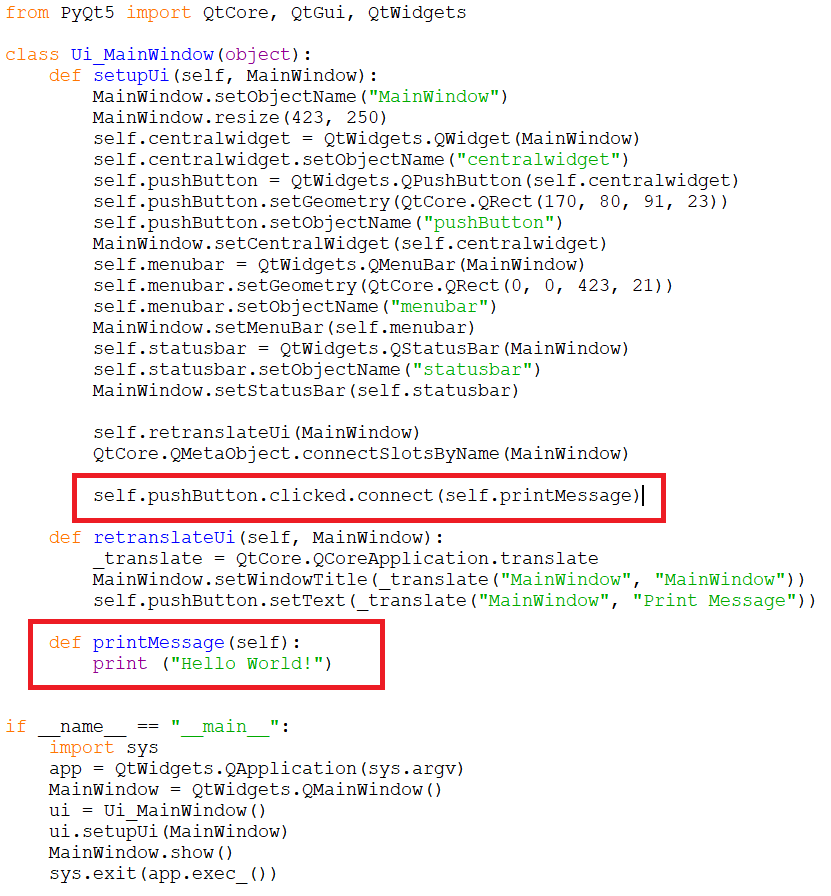 Run the code again and now when you press the button you should see that the script runs the code that you defined in the method you attached to the button.

In this next example, I will show you how to put images in the GUI, add a selection dialog box and add data to a table. 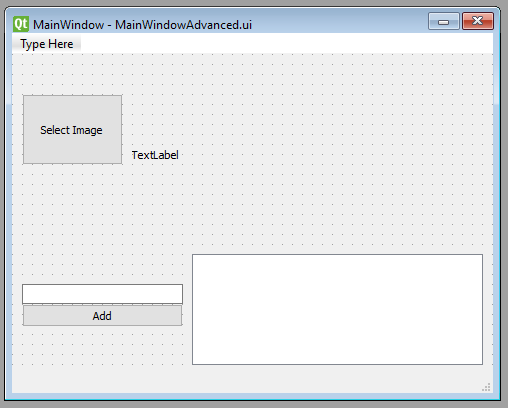 If you click on a widget, for example, the button that will be selecting the button, the Property Editor on the right will display all the options for that object. In there you can edit things like the exact size/position, borders (frames), tooltips and fonts.

First, we will want to edit the Label that is holding the image; click on the label to open it up in the Property Editor. Find "text" under the QLabel section and delete the text, this is the same as double-clicking and removing the text. Now go to the QFrame heading and change "frameShape" to box, this will but a border around the image. 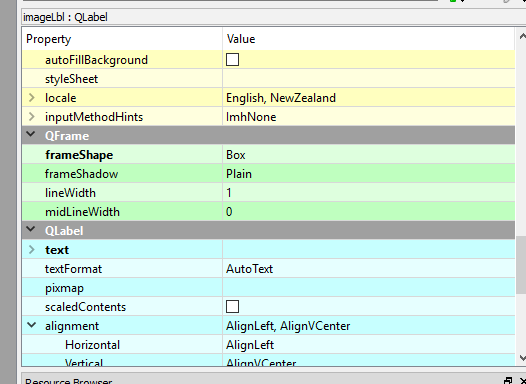 Now click on the select image button and in the QWidget header go to "font". This has many options inside of this so play around to get a font you like (you can leave it if you want). Your GUI should now look something like this: 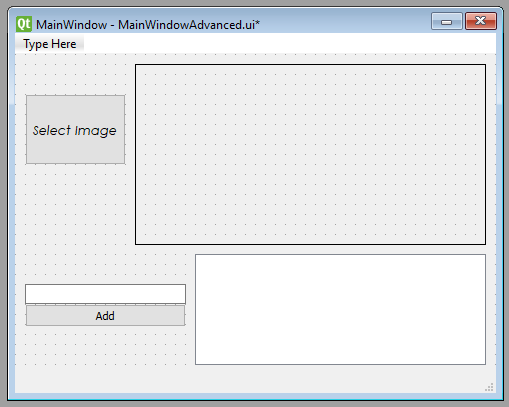 To help you later on, you can also change the "objectName" under QObject in the Property Editor for all widgets so you can identify them easier later. Here is what I named mine: - Select Image Button: selectImageBtn - Image Label: imageLbl - LineEdit: lineEdit - Add button: addBtn - ListWidget: listWidget

Like we did before, convert this .ui file (after saving it) to a .py file.

Now we need to connect all the actions together. The select image button will need to be connected to a method that displays an image selection dialog which will then put an image in the label. Also, we will need to make the 'add' button add the text in the lineEdit object into the listWidget object.

If you open your .py file in IDLE, you can see that the names we gave each widget have passed through to the names of the actual objects. I also recommend running the code now to make sure it works.

First, you will want to create a class definition called setImage; make sure this takes self as it is a class definition. In this method, we want to ask the user for an image (not just any file). If they provide a file, we then need to create a pixmap object and then set the pixmap object to the image label. Before we set it, it is ideal to scale the image to fit inside the label without stretching and aligning it to the centre. Your method will look like this:

In the QtWidgets.QFileDialog.getOpenFileName method call, you can see I have passed the string "Image Files (*.png *.jpg *jpeg *.bmp)". This declares the type of files I will accept. If you want to accept any file, remove this string completely. If you want to make it so the user could switch it to all files themselves, set it to "Image Files (*.png *.jpg *jpeg *.bmp);;All Files (*)"; play around with this to get the idea of what is going on, you can add more file extensions and selections if wanted.

Now we need to attach the button to the definition. This can simply be done using the connect method we used previously; make sure to put it at the bottom of the setupUi definition as we did before:

Run the script and make sure that your button works. Initially, the label will be clear but each time you select a file it should change to the selected file.

We will now need to create another class definition called addItem like before. In this method, we need to get the value of the lineEdit object and then clear it. We can then simply add the value we just got to the listWidget. After you have done that, the method should look like this:

And then like before, we need to connect the button to the method just under the last one we did:

Running the script now you should be able to type in the text edit item and then press add for the item to go into the list.